The FDA and CDC just announced allowing the J&J vaccines to resume, but with a new warning label. This follows a recommended pause of the J&J vaccine due to potential, albeit rare, blood clots in some vaccine recipients. The blood clots formed within 1-2 weeks of the receiving the vaccine, and have been reported in 6 people out of roughly 6.5 million doses administered.

Many people who have received the J&J vaccine or may get it in the future are understandably concerned. Separately, blood clotting, known as thrombosis, has been detected in as many as 69% of unvaccinated patients with severe COVID-19.

There is understandable confusion surrounding these separate causes of thrombosis, so let's dive in to understand a bit more of the science behind these events.

Blood Platelets: What Are They and What Disorders Are Associated with Them?

Platelets are small cell fragments in the blood that regulate blood clotting. Under normal circumstances, they are used to plug (clot) the site of blood vessel injuries, stopping the bleeding. Adverse health conditions related to platelets include thrombosis, the formation of clots within the circulatory system, and thrombocytopenia, low platelet counts in the blood which may lead to excessive bleeding. This video taken with a microscope shows human platelets aggregating in the BioFlux "artery on a chip" system, showing how platelets form a clot in a blood vessel.

Learn More about Thrombosis in This Webinar: 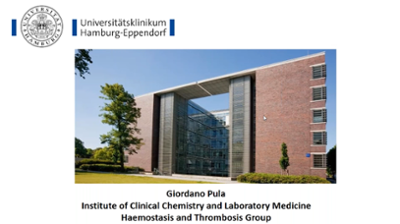 COVID-19 Has Been Shown to Affect Platelet Function

Although predominantly a respiratory disease, COVID-19 has been shown to cause a range of responses, including adverse effects on the cardiovascular system. Some patients have an inflammatory response that may trigger pulmonary (lung blood vessel) thrombosis, and there is a high incidence for those with severe illness. The rate of thrombotic complications is estimated at as high as 69% for those patients admitted to intensive care.

Researchers postulate that the SARS-CoV-2 virus does not itself promote coagulation, but the significant inflammatory response triggers the process. Additionally, a majority of COVID-19 patients have some degree of thrombocytopenia, although the degree varies with the severity of disease. Significantly low platelet count, however, has been shown to correlate with COVID-19 mortality.

Vaccines Have Been Correlated With Thrombosis in Rare Cases

While COVID-19 itself has shown a demonstrated effect on platelets, we have a new variable to add to the mix: vaccine-induced pro-thrombotic immune thrombocytopenia, or VIPIT. While the term is a real mouthful, it essentially means that the vaccine reduces platelet counts in certain individuals. The incidence is quite low - with 6 reported cases out of 6.5 million doses administered for the Johnson & Johnson vaccine.

VIPIT has also been reported with the AstraZeneca vaccine in Europe. VIPIT symptoms can include breathlessness, abdominal pain, and severe headaches. In rare cases, blood clots can form in the brain and may be fatal. VIPIT tends to appear 1-2 weeks after vaccination, and has been more prevalent in women.

So How Is the Vaccine Causing the Same Response as the Disease It Is Trying to Prevent?

Vaccines work by stimulating the body's immune system to generate antibodies against specific protein components of SARS-CoV-2. This primes the body to mount an effective immune response against any SARS-CoV-2 virus in the body and prevents it from taking hold.

However, in some cases it appears that the vaccine produces antibodies that react with platelets, making them stick together and form blood clots. This clumping of the platelets can reduce circulating platelet counts, resulting in thrombocytopenia.

What Should You Do About the Possibility of Vaccine-Induced Blood Clots?

First, note that the incidence is extremely rare, at an estimated 1 in 500,000-1,000,000 people. That's substantially lower than the naturally-occurring thrombocytopenia rate of 1 in 30,000. However, it's not unreasonable to be cautious. So far, VIPIT potential has been associated with the AstraZeneca and Johnson & Johnson vaccines.

Within 4 weeks of receiving your shots, monitor for these symptoms: abdominal pain (chest or stomach), feeling breathless, swelling in the legs, blurry vision, persistent bleeding, multiple small bruises or blood blisters. If you experience any of these systems, seek medical advice.

How are Researchers Responding to VIPIT to Determine If This Is a Real Issue?

There are a number of tools available to the research community to study VIPIT, its causes, and potential ways to deal with it. VIPIT is quite similar to another blood disorder, heparin-induced thrombocytopenia, or HIT. HIT is initiated by antibodies against complexes between platelet proteins and heparin, leading to the same conditions associated with vaccine-induced pro-thrombotic induced thrombocytopenia.

The underlying causes and potential treatments for HIT can be studied using murine (mouse) models that mimic human responses. However, a more recent approach involves using an "artery on a chip" device that utilizes computer chip manufacturing techniques to fabricate devices that replicate human blood vessels. These "microfluidic chips" have the benefits of very low sample consumption, multiplexing to run many experiments in parallel, and the ability to use whole human blood directly.

Fluxion's BioFlux system is the leading "artery on a chip" system that has been used in basic research and treatment development for HIT, and may be a useful device for testing the underlying biology and potential treatments for vaccine-induced thrombocytopenia in relation to COVID-19.

For example, a recent Journal of Clinical Investigation (JCI) publication used a BioFlux system to analyze thrombus formation in HIT. Using the system helped them further understand the mechanisms behind HIT, and they found that the endothelium is a primary target for HIT antibodies.

More recently, researchers have been using BioFlux to assess how the COVID-19 vaccine target (SARS-CoV-2 spike protein) impacts thrombus formation in the vasculature. In a Journal of Hematology & Oncology publication, scientists at Fudan University and Zhengzhou University found that when the experimental blood sample was pre-treated with the spike protein, thrombosis increased significantly.

Microbes Make Us Who We Are Bacteria live happily in several parts of your body: they work hard to...
Read More